Much travelled and internationally published photographer Marilyn Stafford grew up during the 1930s in Cleveland, Ohio USA. In December 1948, Marilyn moved to Paris via New York, and in 1951 briefly sang with a small music ensemble at Chez Carrère near the Champs Elysées. At the club she met Edith Piaf and also became friends with Robert Capa and Henri Cartier-Bresson, who both encouraged her work as a photographer.

Between 1949 and the mid 1950s, Marilyn made photographs in several different Parisian neighbourhoods. Her compelling images of children from Cité Lesage-Bullourde near the Place de la Bastille, provide rare insights into the daily lives of children in one of Paris’ poorest districts.

Marilyn’s photographs of the children who made these streets their playground, document a community whose lives and experiences had been completely underrepresented. Her ability to engage with them provides for posterity captivating visual traces of a vanished neighbourhood, long dispersed when the area was eventually demolished and gentrified.

The exhibition also features photographs taken in Boulogne-Billancourt and Marilyn’s pioneering fashion work, which for the first time took models out of the studio and onto the streets, applying a social documentary approach to the fashion shoot.

The few surviving contact sheets, negatives and prints from Marilyn’s archive of this period have been digitized and painstakingly repaired by Julia Winckler, University of Brighton, who is curator of the exhibit. This process allowed for the images to be enlarged revealing new detail.  The archival material also has a life of its own, revealing Marilyn’s working practices, her photographic eye, and the editorial choices she made by cropping and cutting, making marks with crayons and stapling contact sheets and individual images together. They have the patina of time embedded within them and contain multiple stories as we encounter and hold the gaze of the children Marilyn photographed. Accompanied by a film made by Ian Hockaday – shown as part of the exhibit.

Exhibition curated by Julia Winckler (with the support of SSHRG Canada From Streets to Playgrounds) and with an exhibition brochure with texts by Prof. Adrienne Chambon (University of Toronto) and Julia Winckler. Exhibition take place in conjunction with a co-curated exhibition (with colleagues Adrienne Chambon, Ernie Lightman, Bethany Good (University of Toronto) and Vid Ingelevics and Mary Anderson (Ryerson) at the City of Toronto Archives gallery that focuses on historical representations of children in Toronto’s Ward area and relaunches on 20 March. 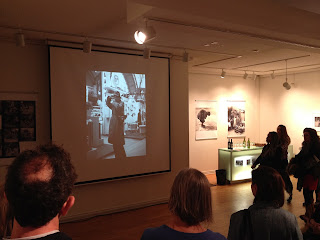 Popular posts from this blog

October 11, 2019
The Lecture Series ART-EXIT: 1939 A VERY DIFFERENT EUROPE   Ben Uri Gallery and Museum is delighted to present a special series of free evening talks at Europe House, 32 Smith Square, SW1P 3EU. These flow from the recent exhibition by the Ben Uri Research Unit, marking the contribution to art in Britain by the so-called ‘Hitler emigres’ on the 80th anniversary of the outbreak of the Second World War. Spread over consecutive Thursdays in October, a range of distinguished experts engage with topics that continue to resonate deeply within our globalised society: identity, migration, displacement and internment - and the power of art to reflect and respond to these issues. Each talk will be preceded by refreshments and followed by an audience Q&A.         REGISTER     17 October 2019, 6.30 p.m. "Collar the lot!" Artists, Aliens and Aspects of Internment in Britain c. 1940 Prof Charmian Brinson, Prof Fran Lloyd, Dr
Post a comment
Read more

Landscape from a dream: Paul Nash

November 29, 2016
'One reality leads to another with the assurance that both exist instantaneously and in the same place' - Roland Penrose, commenting, in 1938 on the landscapes of Paul Nash - currently @ TATE BRITAIN. Large comprehensive retrospective of Paul Nash's work - rich use of symbolism, metaphor and planes of vision. Dreaming trees and Aerial Creatures particularly moving.
Post a comment
Read more

'An archive is a conversation between the present and the past': Black Chronicles Photographic portraits 1862-1948 @ National Portrait Gallery

julia winckler
Started a blog in August 2015 to share links to interesting exhibitions, books, resources, events and films that I have come across that some of you may find interesting.